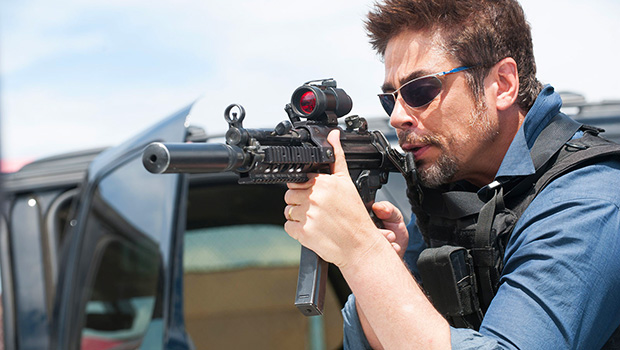 “Your American ears won’t understand, your eyes will see things that make no sense, but in the end, you’ll understand.”

You can now listen to an audio recording of this review, or scroll down to keep reading.

From the opening moments of the film, where a dark screen is accompanied by a pounding, pulsating rhythm that escalates in volume and culminates with a violent police home invasion, the suspense and tension in Denis Vileneuve’s film Sicario never abates. The director of the 2013 film Prisoners, Vileneuve is no stranger to dark, violin-string-taught suspense. He tightens the tension even more in his latest project, a film set in the dangerous, nebulous borderland of the Mexican-American drug trade.

Sicario, which is the Spanish word for hitman, is a graphic, disturbing film, full of violent, dark images, and even darker implications –what Vileneuve leaves off the screen is often as graphic in our imaginations as the actual scenes he captures. And those actual images are often horrific – from close-ups of dismembered human limbs in a subdivision in Arizona to naked, mutilated corpses hung from an overpass in Juarez, the film captures the horror and violence that we quickly come to understand is commonplace in this world.

While the violence in the film is crystal clear, the human roles in this tragic drama are not. The distinction between the good guys and the bad is unclear, as is who is attached to what law enforcement agency as the CIA, the FBI, and local law enforcement’s roles are blurred and indistinct. Not only does the audience struggle to sort out the various players, but also the protagonist of the film, FBI Agent Kate Macer, played by Emily Blunt, operates in the dark for much of the three-day span of the film.

Blunt is convincing as a tough but vulnerable Agent Macer, and her naiveté is at times maddening if understandable. Her unswayable goodness is contrasted with a flip-flop clad, laid-back, smiling Josh Brolin as Matt Graver, an agent of doubtful origin, and the dark, brooding, heavy presence of an emotionless Benicio Del Toro, playing a character known simply as Alejandro. Brolin and Del Toro, however, are not necessarily what they appear to be, and the farther we get into the film, the more we understand that Blunt’s character has fallen down a rabbit hole, lost as little Alice was, and the characters around her are as reliable as the Cheshire Cat and the Mad Hatter.

The dance among these three characters becomes the real story in the film, but the choreography is determined by the dark world of the Mexican drug trade as its product is brought to and distributed in the U.S. This world is dark, violent, and unforgiving, and it has its own set of rules. Brolin and Del Toro’s characters, along with the rest of their team, know these rules, but Blunt’s character and her slightly less naïve partner, played by Daniel Kaluuya, are in new and dangerous territory. It becomes clear very quickly that they are in way over their heads.

Whether they will survive this world, whether they will be able to sort out whom they can trust and whom they can’t, and whether they can live with what they learn and what they become are the questions the film asks, and Agent Macer’s confusion is transferred to the audience as we struggle with those same questions. I’m not sure I ever found clear answers to these questions, but one thing is crystal clear: the world in which these characters are operating is as unlike the world most of us live in as Alice’s Wonderland is. And to make sense of it, using the rules and mores of a more civilized culture, is insurmountable.

Sicario’s convincing portrayal of this world most of us could never understand, the strong, convincing performances of the cast, and the riveting action driven by the characters’ various motives and desires, add up to a film that captures and holds its audience from beginning to end. I wouldn’t miss this one, but be prepared to be on the edge of your seat for a graphically violent and tense two hours. And don’t expect to have all the answers when you walk out of the theater and into your orderly life.

Sicario is now playing at the Promenade Cinema. Click here for showtimes.