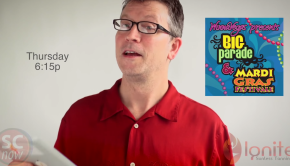 Week Ahead: Big Parade, Explorers and Saturday in the Park