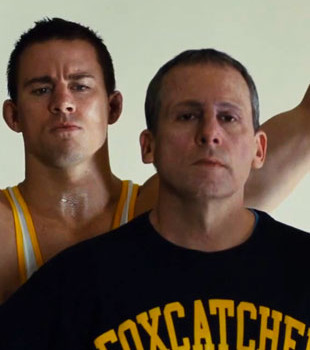 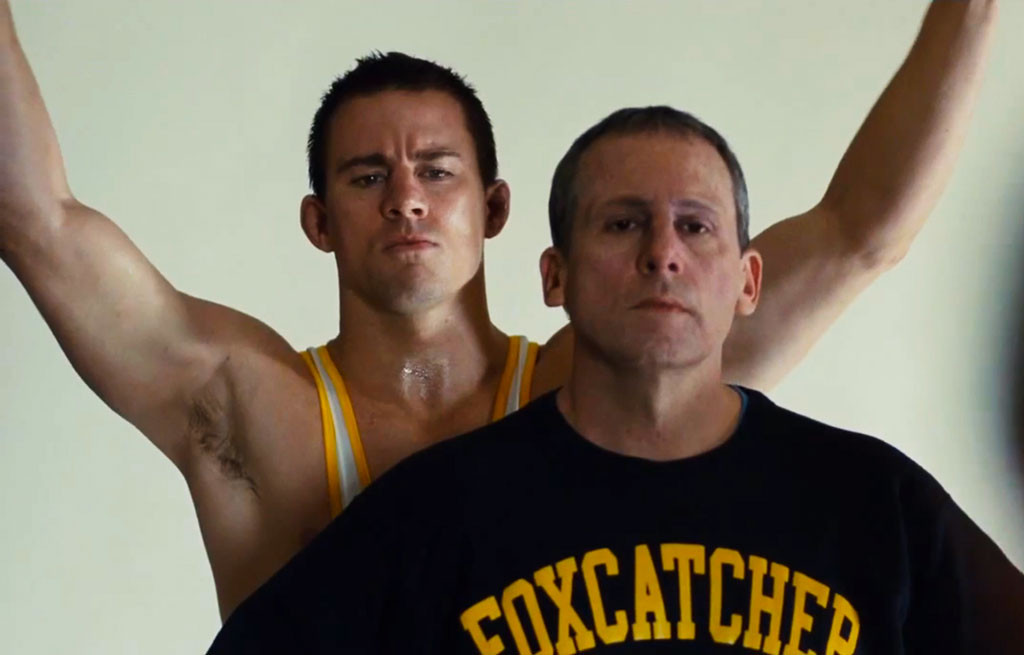 “Coach is the father. Coach is a mentor. Coach has great power on athlete’s life.”

Foxcatcher had been on everyone’s radar before the Oscar nominations were announced late last week, primarily because of the attention Steve Carell’s performance has garnered as the deranged multimillionaire John du Pont. Not only has the actor stepped away from his usual comedic roles, but also he’s taken on an eccentric and compelling figure in recent American culture. However, I found his admittedly memorable performance – as well as the film itself – falling just short of all the hype.

The film dramatizes the true story of du Pont’s involvement with the 1988 Olympic wrestling team, focusing primarily on his obsession with the brothers Mark Schultz, played by Channing Tatum, and David Schultz, played by Mark Ruffalo. Du Pont, a sad, frustrated man whose life has been controlled, critiqued, and crippled by his domineering mother, in turn uses his wealth to control those he can. And that wealth purchases the endorsement of the Olympic wrestling committee for a training camp at his Foxcatcher farm, the title of coach, the forced loyalty of his star wrestler Mark Schultz, and faux respect from his wealthy cadre. But he is unable to purchase everything he wants, which leads to the film’s tragic conclusion.

Before the film concludes though, we become intimate with the cost of du Pont’s manipulations, one of which is the brothers’ relationship. The relationship between the brothers is one of the most compelling elements of the film. However, it is relegated to a minor plot line with the emphasis of the film being du Pont’s obsession with the younger Mark Schultz and his drive to command respect. Tatum turns in a very strong performance as the naïve and damaged wrestler, and his body language speaks loudly as his character’s dialogue is very limited. This is in keeping with much of the film as many scenes are carried solely by the movements of the actors, whether on the mat or simply going about daily routines.

Carell’s du Pont is also pensive, and his silence is used at least as often as dialogue to convey his character. This works to some extent, but I found his constant head angle – clearly a trait of the factual du Pont that Carell wanted to bring to the story – and strange silences a bit obtrusive to the storytelling. I also found his prosthetic nose, while I’m sure is historically accurate, distracting.

By far the strongest performance in the film is Ruffalo’s. When he is onscreen, and even at times when he’s off screen, Ruffalo commands attention. He’s perfectly cast as the one “normal” character in the story, and his nonchalant incorruptibility is non-threatening and endearing. As du Pont’s nemesis in many ways, Ruffalo brings humanity to the film and the story.

The sport of wrestling is also somewhat a character in the film, and the choreography of the wrestlers is sometimes beautiful and almost always compelling. It conveys anger, love, and fear in ways dialogue cannot, and at times it becomes homoerotic, pulling the audience into the violent intimacy of the sport. This attention to the movement on the mat is a paradox to the film’s success, however. While it is mesmerizing at times to watch the movement of these bodies and psyches, it also demands a patience not all viewers will be able to summon.

Overall, however, the film is worth the investment. The characters are compelling and the performances across the board are strong, earning Oscar nominations for both Carell and Ruffalo, even if the pace of the film is slow. It is clear the sluggish pace is intentional; the film’s deliberate unfolding parallels its sport’s movement as Bennett Miller’s direction circles slowly, scoring points carefully, until the final slam to the mat at the end. And like a wrestling match, it takes a certain type of attention and patience to remain engaged. Even if you’re not a fan of the sport, this film warrants the time and stamina it demands. And be prepared, just as you must in a good wrestling match, to exercise patience and summon fortitude as the drawn-out, mostly understated violence of the story unfolds.