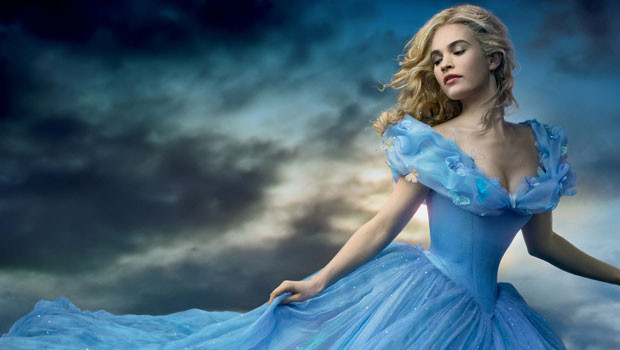 “Have courage and be kind.” – Cinderella

The latest remake of a Disney classic hit the big screen last weekend in the film Cinderella, and although nothing surprises in the film, those who love the Disney original will probably love this film. Disney opted this time for a live-action film rather than animation, and with special effects, it’s just as easy, if you’re willing, to suspend your disbelief as it was in the original.

Director Kenneth Branagh is no newcomer to the remake – he’s directed and acted in many film versions of Shakespeare’s plays, and there he is known for bringing the 17th century plays to life in new and exciting ways. This film, however, is more of a copy and a bit of an extension than a recreation; he and screenwriter Chris Weitz forgo the opportunity to bring something new to the film and follow the original story closely even as it adds a few new scenes.

The addition of scenes from Ella’s childhood (before her wicked stepmother and stepsisters rechristen her Cinderella) should have brought new life to the story, but instead it goes on a bit too long, and viewers may begin to wonder when the real story will start. In these early scenes, we see a little more of Ella’s mother who suddenly develops a sudden gentile cough and seems expire a few hours later, and we hear Ella’s father explain how loneliness drove him to find a wife before he brings in the high-maintenance stepmother and stepsisters. Although these scenes are embellishments of the original story, they add nothing really fresh.

But Disney knows it audiences well, and this Cinderella delivers the standard Disney magic in visual special effects, stunning costumes, and some strong performances. When Cinderella’s fairy godmother appears and turns the mice into horses, lizards into coachmen, and a goose into a driver, it’s a treat to watch the transformation. Turning a pumpkin into a coach only takes a shake of a magic wand for the fairy godmother, but to convincingly pull it off must have commanded some real imaginative work by Disney’s special effects designers – and pull it off they do.

These special effects are enhanced by some spectacular props and costumes. We are enchanted by the magic glass slipper that will only fit Cinderella’s foot, and the little girl in any of us who secretly long to wear a ball gown won’t be disappointed with her wardrobe. From a blue dress that uncannily recreates the one from the animated film to her (spoiler alert) wedding dress, Cinderella’s costumes almost steal the scenes.

Lily James, best known for the PBS series Downton Abbey, is a warm and sweet Cinderella, and she does a nice job stepping into those glass slippers. However, she’s come under some scrutiny for her physical appearance. The design of her gowns accentuates her unnaturally thin waist, and it remains a mystery if Disney enhanced the smallness of her waist – the studio and she deny it, but some shots encourage skepticism. Disney has come under fire for its animated heroines sporting unnatural features intended to “enhance” their beauty, and the choices made in this film do nothing to squelch those criticisms. In a world where girls and women combat unrealistic body images, it seems Disney could have been more thoughtful on its portrayal of this soon-to-be princess.

One character who rings with authenticity is Cinderella’s stepmother, played with fabulous venom and a sociopathic fervor by Cate Blanchett. Blanchett makes the very most of a rather weakly written and unoriginal role, bringing a real menace to her character. Although the film does give a little backstory and justification to her madness, the character remains one-dimensional. But what a dimension it is – when Blanchett is on screen, we can’t look anywhere else. Her daughters are silly and forgettable, and even though they were meant to be funny, we never find ourselves laughing at them. The other overt attempts at humor also fall a bit flat, and sometimes seem extraneous.

One attempt at humor comes when the Prince first appears on screen. Although this is the point where the film really begins to take off, the scene where he and Cinderella first meet isn’t as funny as it’s meant to be as the two characters banter and their horses circle to the point of distraction. This attempt to expand the storyline and insert humor does not elevate the film, but rather distracts from the story we’re all waiting to see unfold. But many scenes do evoke the familiar story told in the animated film; often movie-goers who grew up on the Disney original will feel a pang of recognition or nostalgia.

While the nostalgia carries the film to the sweet conclusion we all expect, it misses some opportunity to rewrite a fairy tale that Disney commandeered all those years ago from the original Grimm fairy tale. Disney doesn’t add back in any of the darkness as we saw in Into the Woods or any new spin on the story as we saw in Maleficent. There are some feeble tries to escape the damsel-saved-by-a-man cliché, and the film adds a few lines to move our heroine from her traditional subordinate role. Cinderella repeats her mother’s dying words the Prince to  “Have courage and be kind,” and the Prince takes them to heart and uses them as his philosophy to govern. And when the Prince commands that they search the kingdom to find his missing princess, he proclaims once found, he will “forthwith marry her” but “only if she is willing.” This attempt by Disney to give Cinderella agency falls a bit flat and feels like simple pandering to its critics.

But with all its faults, those who come to see Disney’s classic version of Cinderella will not be disappointed. It is a pleasant retelling of the animated film, visually stunning, and acted well with no surprises. And most likely, that will please most of its audience.