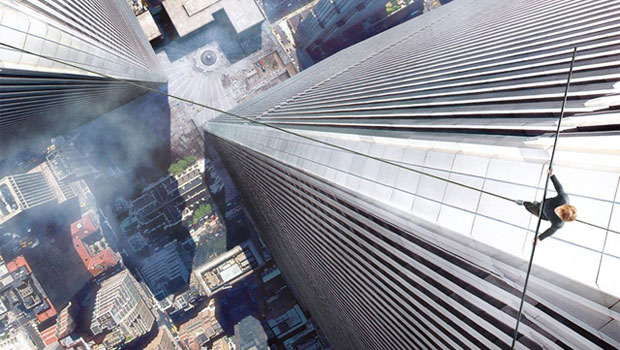 You can now listen to an audio recording of this review, or scroll down to keep reading.

In 1974, Philippe Petit strung a wire between the twin towers of the World Trade Center and walked across it. The Walk, starring Joseph Gordon-Levitt as an impish Petit, dramatizes the wire-walker’s life and his drive to find and complete the most notorious wire walk ever attempted.

The film, narrated by the character Petit from atop the Statue of Liberty’s torch, is an interesting mixture of cartoonish silliness, reminiscent of Paul Reuben’s Big Top PeeWee, and high-tension drama, found in ensemble heist films like Ocean’s Eleven. This combination of tone is less a true blending and more a half and half mixture with the first part of the film lending itself to those cartoonish performances and storytelling, and the last part of the film to suspenseful, realistic action.

If anyone could pull off this kind of experiment in tone, it would be the accomplished director Robert Zemeckis. With playful films such as Who Framed Roger Rabbit and Forest Gump in his repertoire, along with more traditional films including Flight and Cast Away, Zemeckis is no stranger to successful experimentation in filmmaking. His success is due, in part, to the quality of performances of the actors he works with, and the performances in The Walk are strong for the most part.

Gordon-Levitt portrays Petit as a playful, light-hearted street-performer for much of the film. His performance comes up short, however, as he’s asked to turn from silliness to intensity when the film makes the shift. For someone who is as relentlessly driven to accomplish a super-human feat as Petit is, Gordon-Levitt’s characterization only hints at the certain darkness Petit’s intense drive surely evokes. That said, once the preparation for the feat begins in earnest, Gordon-Levitt’s and the supporting cast’s performances sweep us away. So while his French accent feels somewhat contrived, and for much of the film it’s hard to really see him as anything but Joseph Gordon-Levitt acting as Philippe Petit, he redeems himself in the last part of the film.

The story belongs almost exclusively to Petit, with little exploration of the supporting characters. The most interesting performances are those of the “accomplices” who help Petit plan the walk, get his equipment to the top of the towers, and run the wire across the expanse, especially César Domboy’s performance of agoraphobic mathematician Jeff/Jean-François.

In this imperfect film, however, the shortcomings in performance, story, or character development are all forgiven in those final scenes. Using all the special effects at its disposal, including vertigo-inducing 3D technology, the reenactment of stringing the wire across this unimaginable expanse and Petit’s historic walk is flawless. Even Gordon-Levitt finally loses himself in the role – he is no longer an actor but an artist on a wire, and we are there, watching a man obsessed with accomplishing the impossible feat before him.

Those final thirty minutes or so of The Walk make it, even with its split personality and minor flaws, worth the ticket price. Holding our breath as Petit steps out onto the wire, we can barely stand the tension. His performance on that wire commands an unanticipated respect and joy, not only from that original audience looking up at the twin towers in 1974, but also from today’s moviegoers who see those towers so differently.

Those two iconic towers figure prominently in the film from the scene where Petit first spots a photograph of them in a doctor’s office waiting room through to the last shot of the New York City skyline as the film closes. Petit’s accomplishment, which was met with the city’s overwhelming support and approval, is commonly believed to have shifted New Yorkers’ opinion of the towers, moving them from a gaudy expression of exaggerated capitalism to the beloved symbol of the Big Apple they held until the day they tragically came down. That tragedy would have been an easy emotional device, but fortunately Zemeckis resists that easy heart-string tug and instead allows the film to stand on its own.

The Walk is now playing at the Promenade Cinema. Click here for showtimes.