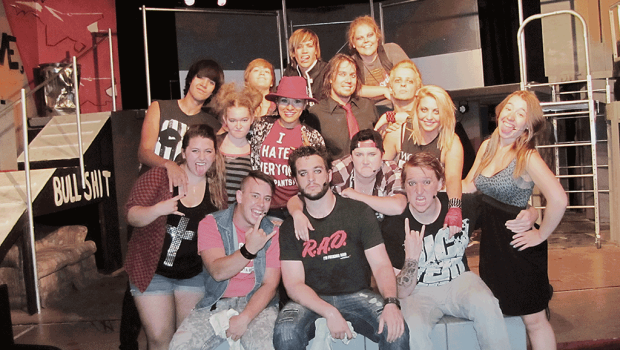 One of the greatest rock albums of all time will be brought to life in Sioux City this weekend, and it’s enough to get any punk fan jumping in her steel-toed leather boots.

The album they’ll be bringing to life is Green Day’s “American Idiot,” which is the title of the show taking the stage Friday at Shot in the Dark Productions.

This album is packed wall to wall with hits and during the time around its release in September 2004 was practically the anthem for youth who would rather give up a middle finger than a handshake.

“The show’s a punch in the face,” said director Joey Hartshorn.

Cast member Jason Rasmussen chimes in: “It’s just a relentless hour and a half that never ever lets up.”

Shot in the Dark Productions is known for its edgy performances, and this show does not hold back. When I was given a preview of a couple opening numbers, my initial instinct was to start headbanging. It was loud, aggressive and punk rock to the fullest. The stage was covered with rebellious graffiti, there was beat up furniture and everyone is covered in ’90s punk gear.

After the preview I could tell there was something stronger and much more real to this show than I originally expected. The show comes to life instantly with heart-pounding music and dance, but then suddenly takes a quick turn when you begin seeing the root problems within characters as they start to unravel.

The actors in the show are not just singing and dancing but are also dealing with deeper issues, such as addiction, love, PTSD and abuse. The story is centered around three main characters Tunny, Johnny and Will. Song by song, the strong emotional plot slowly unfolds. The cast told me in their own words that it’s a story of “courage and conflict.”
Three young men escape from their hometown for life in the big city but things don’t go as planned. Tunney feels the need to enlist in the military, Will is forced to go back home to take up family responsibilities and Johnny finds a mysterious love and a dangerous new friend.

Everyone in the show is between the ages of 18 and 25, and many said the struggles their characters face are in some cases extremely relatable.

“Tears have even been shed” during rehearsals because of this, Grace Hoefer told me.

“We can all relate and it’s why our hearts on so far into the show and why we want people to come hear our stories,” said cast member Nancy Seeman.

Each cast member is, in a way, an extension of his or her character and this adds a very real element to the show. In some ways the characters they play are actually the people their fighting not to be.

“You can’t go too deep into your emotions because it’s hard to come back,”  Rasmussen said.

“It’s been a struggle getting them to do what they need to do because they like to be themselves on stage but we’re definitely getting there,” said Hartshorn.

The show is full of extremely high energy and deals with tons of emotion. There’s hatred, love and everything in between. After I talked to the cast for awhile I could tell that this was the perfect group of people to take on this show. The entire cast and crew come off as one big family and you can see this chemistry take place on stage because everyone was in sync.

It’s an adrenaline rush from start to finish and with all the hard work each cast member has put into this show, American Idiot’s regional premiere is one you won’t want to miss.

As a young adult who grew up listening to Green Day, I can’t wait to see the full production. American Idiot opens today, July 10 and will run for 11 shows through July 27.

Shot in the Dark Productions is located at 413 Nebraska Street. Tickets are on sale now for $15 and can be reserved by calling this number 712-635-3616. Find more information on their website. http://www.shotinthedarkproductions.org/ or on Facebook