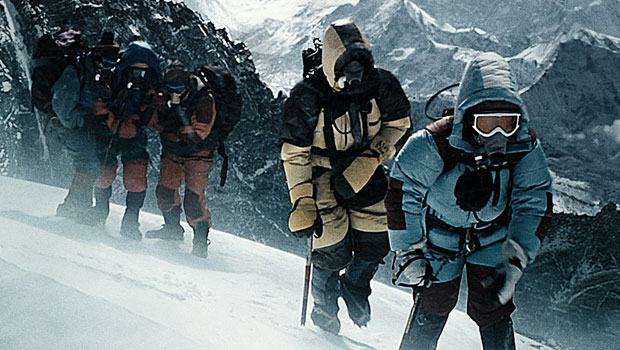 “Human beings simply aren’t built to function at the cruising altitude of a 747.”
– Rob Hall

Listen to the audio recording of this review, or scroll down to keep reading.

When Outside magazine hired writer Jon Krakauer to accompany Rob Hall’s Mount Everest climbing expedition in 1996, no one had any clue that he would experience first hand, and subsequently write about, the worst climbing accident to occur on the big mountain. His book, Into Thin Air, is a vivid and riveting account of his experience, and maybe one of the best adventure books I’ve read.  The film Everest is the latest in a number of films made to retell that tragic story, and it is the strongest of those films.

Everest steps away from Krakauer as central character; instead guide Rob Hall fills the protagonist’s shoes. Played by Jason Clarke, Hall’s character is likeable and nurturing as a guide, coaching and encouraging the men and women he’s guiding up the mountain. Hall’s approach to guiding is contrasted to that of Scott Fischer, played by Jake Gyllenhaal, the other guide figured prominently in the story. Fischer prefers a more hands-off approach to his climbers, and Krakauer received some harsh criticism for portraying Fischer as irresponsible.

While the book positions the two as rivals, the relationship is made less competitive in the film, allowing all the tension to fall on the relationship between the climbers and the mountain. Both Clarke and Gyllenhaal do a good job in the film, but Gyllenhaul’s character doesn’t get the time it deserves in this recreation – it is primarily his familiarity as an actor that accounts for his memorability.

Another recognizable actor, Josh Brolin, does a good job playing one of the more memorable climbers on that day, but one of the film’s main shortcomings is that most of the climbers are indistinguishable. It’s hard to care about characters we can hardly tell apart, much less with whom we fail to feel a connection.

The female non-climbing characters are some of the few supporting characters who don’t run together. Keira Knightly and Robin Wright play two of the women left behind, underscoring the toll the mountain takes not only on the climbers, but also on their families, and Emily Watson is the basecamp operator for Hall’s team. While Watson’s character is one-dimensional, Knightly and Wright do a good job capturing the anxiety and pain their characters experience.

The lack of distinguishability among the climbing characters is partly due to the realistic recreation of the event. The cast is quite large with climbers and support teams fully represented. For the majority of the film, these characters don heavy parkas and are struggling in frigid temperatures and high winds. Much of the film is shot on location in the Himalayas or the Italian Alps, and what isn’t shot there is recreated in the studio. There is not much green screen work in the film – its realism is enhanced by the actors actually performing in hostile environments. (Josh Brolin is quoted as saying it was one of the harshest acting jobs he’s ever done.)

This realism sweeps the audience away during the film. From the chasm-spanning ladders in the ice fields to the ledge scenes near the summit, the audience accompanies the climbers in their dangerous attempt. Director Baltasar Kormákur, also having directed the film The Deep, is no stranger to the most dangerous aspects of the natural world. He recreates the paradoxically violent beauty that is Everest, and audiences get a peek into a world usually reserved for those who are willing to risk everything for adventure.

So unless you will be making the trek to Nepal and the Himalayas, this film will give you what may be the best glimpse you’ll get of the highest place on earth. Although Everest doesn’t explore what drives a person to actually make that climb, and it prevents real intimacy with any of the characters, we do care about them. And the adventure itself is mesmerizing. Even having read the book, knowing who will survive and who won’t, I found myself holding my breath and shivering as the characters struggle to survive their climb.

Everest is now playing at the Promenade. Click here for showtimes.