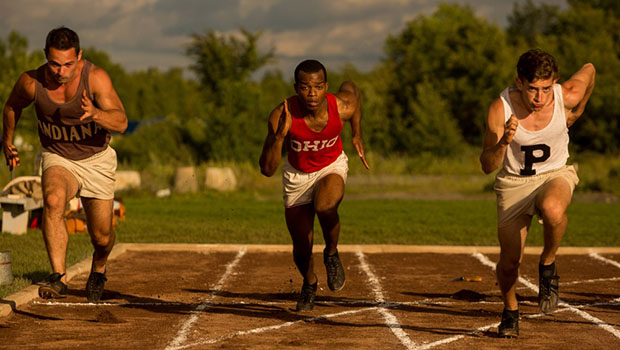 “In those ten seconds, there’s no black or white, only fast or slow.”

Listen to Leslie’s review on KWIT!

When Jesse Owens won four gold medals in Germany at the Olympic games, he not only made an impact in track and field, but also in the world. Hitler’s Germany had begun, quietly, its horrific practices of rounding up Jews and racial “cleansing,” and while the Nazi regime attempted to hide the worst of its practices during the games, the effects were clear. Many countries considered boycotting the games, including the U.S., but the U.S. Olympic committee, after some deliberation, decided to participate. As a Black athlete, Owen’s success provided a beacon of hope in a darkening world.

The film Race dramatizes Owen’s performance and the world in which he ran. While the film is flawed in many ways, the story is important and memorable. In today’s world where Black athletes are numerous and often at the top of their sports, it’s easy to forget that there were many, many years during which athletes of color were prevented from competing or, if they could compete, discriminated against and ridiculed even as they defeated opponents and smashed records. Race addresses this marginalization through locker room scenes, personal attacks, and scenes that include society’s common overtly racist systemic practices while it also tells Owen’s personal story of struggle and success.

Stephan James, best known for playing John Lewis in Selma, does a very good job as Owens. His character is likeable and one who balances the necessary acquiescence and strength the times necessitate. The struggle the character goes through in deciding whether to participate in the games or not isn’t quite as developed as it could have been, but the intricacies of the plot prevent much depth or attention to that struggle. This is the main issue with the film – it feels at times like it’s bitten off more than it can chew with its broad range and complexity. We are directed to consider the Olympic committee’s struggles, Germany’s darkness and its sanitizing of the Olympic production for world-wide consumption, in addition to Owen’s running and personal life and his relationship to his coach.

Part of this fragmented and frenetic plot line might have to do with the limited experience of the film’s director Stephen Hopkins, who is mostly experienced in directing television episodes, including a season of the drama 24. In a television series or mini-series, a director can move the audience’s attention among many various storylines – in a major motion picture, he or she must be more discriminating in honing a plot line. If this had been a mini-series, and perhaps that would have been the best genre for the story with all its intricacies, he most certainly would have had the luxury of exploring those various lines. However, his direction doesn’t have that luxury and needed to decide and focus on the heart of the film. The plot line that most clearly calls for that kind of development, and is the one most fully developed in the film, is the one between Owens and his Ohio State track coach.

Owen’s coach, Larry Snyder, is played by Jason Sudeikis. In not a terribly strong performance, Sudeikis does hit his stride late in the film. However, he never really finds that combination of compassion and hardness, humor and no-nonsense he strives for in the character. Sudeikis, though, is likeable in almost every thing he does, and he is the same here. The mediocre performance doesn’t distract too much from the film, and for the most part the audience shouldn’t have a difficult time suspending its disbelief.

The supporting characters are well done and interesting – Owen’s girlfriend/wife played by Shanice Banton, his German competitor, Carl ‘Luz’ Long, played by David Kross, Jeremy Irons as Avery Brundage of the Olympic committee, and Clarice van Houton as Nazi filmmaker Leni Riefenstahl – but the characters exist in that space between compelling and undeveloped and they have the dubious quality of distracting from the most important relationship of the film, the one between Owens and Snyder. That relationship should have been the real heart of the film, and at times it almost is, but again, it doesn’t quite hit the mark.

With all its flaws and shortcomings, however, I recommend the film here in the wake of the awards season. It is of lesser quality than those powerful films that have filled the theaters of late, but its message and historical value are important. Owens’s performance at those 1936 games was an important moment in our history, and its dramatization in contemporary film is long overdue.

Race is now playing at The Promenade. Click here for showtimes.