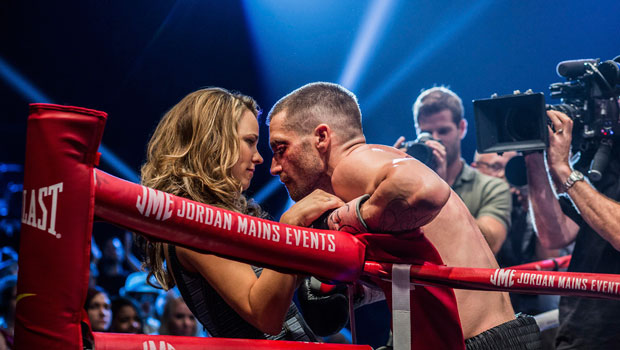 “A fighter knows only one way to work” – Billy Hope

For those who grew up with the Rocky franchise, the story here of the defeated boxer battling back is familiar, and not only because of the arena in which the film is set. From Rachel McAdams as the good woman who keeps our boxing protagonist focused and who gives him a reason for living and winning, to Forest Whitaker as the cranky trainer who makes the protagonist earn his respect, there are recycled tropes aplenty. Not that the entire story is a remake –the horrible loss that sends our protagonist cycling down and the reason he has to try to fight his way back are fresh in many ways. The film keeps the audience engaged, and I could hear sniffles in the darkened theater more than once as Gyllenhaal’s struggles pull on the emotions.

And perhaps, as I mentioned, a lesser actor might not have pulled off this familiar story as effectively. Gyllenhaal’s portrayal of the film’s protagonist, Billy Hope, is authentic and compelling. His physical presence is captivating as he fights and bleeds and spirals into dejection. When he gets out of bed in the morning after a fight, we feel the pain and the struggle to move. When he slams a bar stool to the ground, we feel his anger.  And when he loves his wife or his daughter, we feel the affection and real need he has for them. Although we sense the outcome of the movie, we are willing participants along his journey because he is so convincing.

Although the direction is a little mediocre for this film, Antoine Fuqua does instill a sense of impending disaster from the opening scenes, engaging the audience right away. However, I believe the actors’ performances carry the film. McAdams does a fine job in her role as his wife, confidant, lover, and business advisor. She plays her limited role with depth, and we’re never really sure what’s going on inside her head. This adds to the feeling of impending disaster that Gyllenhaal’s character carries.  Whitaker is good, as he always is, but he doesn’t seem to bring anything original to his character – nothing makes his trainer unique from the one in the Rocky films all those years ago.

The fight scenes are captivating, and it’s hard sometimes to avoid turning away as blood runs from the characters’ faces and Gyllenhaal takes punch after punch in some of the fights. It’s clear that Gyllenhaal trained hard for the film, and it shows in his ability to convey an actual boxer. (Of course, I don’t watch boxing when it’s not fiction, so I’m not coming from a place of real knowledge, but I was convinced.)

Good performances, a comeback story, lots of realistic action, and emotional manipulation come together in Southpaw. Flawed as it is, the film is memorable and worth the ticket price, and I enjoyed it.  While it isn’t a knockout, it goes all 12 rounds and pulls off the win by points scored.