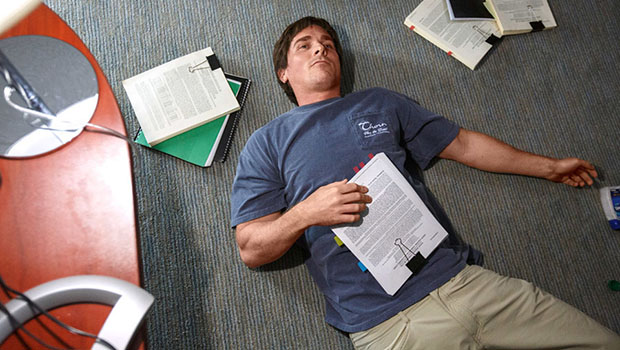 “It ain’t what you don’t know that gets you into trouble. It’s what you know for sure that just ain’t so.”

With the awards season upon us, and with the traditional release of popular and critically acclaimed films on Christmas Day and in January, it’s heaven at the box office for film lovers right now. Many of these quality films focus around one central character and his or her struggles (Joy, The Danish Girl, Concussion, Revenant), and others focus around an ensemble of characters (Spotlight, The Hateful Eight), but one film stands out as more than just a story about a character or a group of characters. Adam McKay’s The Big Short is a film about all of us and the hit our economy took because of the actions of a greedy bunch of unethical financiers and a broken banking system.

McKay, directing his first non-comedy and his first film not featuring Will Ferrell, takes a complex situation that few of us understand and makes it not only understandable, but also enjoyable to watch. He uses montages of still photos and film clips to reflect the eras as they pass by, and he employs celebrities as themselves to explain complex issues directly, including Margot Robbie drinking champagne in a bubble bath. His comedic roots are clear as parts are laugh-out-loud funny and endear us to the film, but the horror of the situation is not diluted and we’re never allowed to stay comfortable for long.

Part of the charm of the film is the disconnected group of players who decide to “short” the big investment banks by betting on the crash of the housing market. Ironically called unpatriotic for betting against the U.S. economy, these men bet everything on the fall of the once infallible and indestructible mortgage portfolios of the big banks and the subsequent demise of the American (and global) economy.

The group is headlined by Christian Bale, a medical doctor turned stock portfolio manager who wears t-shirts, shorts, and no shoes and appears to be a bit autistic; Brad Pitt is a recluse who once was in the financial game and fled it for an organic and off-the-grid existence; and Steve Carell is the lead in a group of motley, semi-gangster, and a bit bumbling investment officers. Ryan Gosling rounds out the group as an unethical profiteer whose role in the financial market is a bit vague to me. (That said, I’m adding this disclaimer to my review: these descriptions of what the characters above do in the world of finance may be wrong, as I’m unsure what exactly their roles are – but you get the picture.)

While the characters’ roles may be a bit foggy, what happened to the housing market and subsequent crash of the economy is clear. Including an especially memorable scene where Carell and his group physically visit and investigate the causes and effects of junk mortgages and the ensuing housing bubble burst in Florida, the film deconstructs the complex issue and enables us to get a feel for what happened in all its horrific glory. Both Carell and Bale have been nominated for Golden Globe awards, and rightfully so, and the other characters are well-acted as well.

The film, while tremendously entertaining, is also a cautionary tale and allows no false security that Wall Street and the bankers who run it have learned their lessons. There is no feeling that this was a dark time in history that will never be repeated; in fact, the sense that this all could happen again –  and most likely will – will have filmgoers reevaluating their portfolios. And although the idea that this can all happen again is terrifying, the film itself begs to be revisited in repeat viewings not only to more fully understand the complex issues it explains, but also for the sheer entertainment value of a carefully-crafted, creatively directed, and well-acted story.

The Big Short is now playing at the Promenade Cinema. Click here for showtimes.