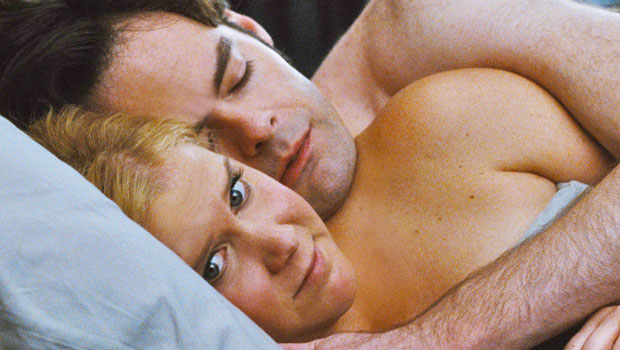 When I first saw the teaser trailer for Trainwreck, many months ago, my first reaction was an eye-roll.

Great, I thought. I can just see it now. The story of a wild woman who drinks and sleeps around too much, and basically just doesn’t give a you-know-what…until she meets some guy that sweeps her off her feet and makes her change her ways. I had never heard of Amy Schumer, and knew nothing about her particular brand of comedy. I just assumed that the movie would be a blatant slut-shaming script (probably written by a man) masquerading as female empowerment. No, thank you.

A few days later, I was scrolling through my News Feed, and saw some article about a hilariously honest feminist performance, and clicking on it led me to a YouTube video of Amy Schumer, performing stand-up comedy. During her skit, she mentioned that she had recently wrote a script for a movie, and she assumed that they would get someone else to play the part, and was shocked when they asked her to do it. She cracked some jokes about having to get a personal trainer, and refusing to go hungry, and I immediately loved her.

And I really wanted to see her movie.

Since then, Schumer has quickly become an even bigger deal in the entertainment industry. She’s unconventional, unapologetic, and unbelievably funny. She’s also everywhere, making headlines with her fearless-yet-funny statements and comedy sketches about body image, gender inequality, and other important issues.

Speaking of funny, I feel the need to throw out a little disclaimer here: I’m not a huge fan of comedy. This is a Judd Apatow movie, which I guess means something to some people, but after reviewing his IMDB page, I can tell you that I’ve only seen a handful of his movies and was unimpressed by most of them. And, since this film is labeled as being “from the guy who brought you Bridesmaids,” I should probably confess that I’ve never seen that one, either.

I’m not a total stick in the mud. And, I’m not a prude, either. I enjoy a good dirty joke as much as the next girl, but I also appreciate humor that doesn’t rely on shock value, flatulence, and overly offensive material. My distaste for this kind of comedy usually means that I wait until these types of movies are available on Netflix or Redbox before I give them a chance. Knowing that Schumer herself wrote the script gave me hope that this film would be worth an exception.

I am happy to report that, in my humble opinion, Trainwreck is absolutely hilarious.

I honestly can’t remember the last time I laughed out loud so much in a theater. Sure, there is definitely some crude shock value, and while there aren’t any fart jokes I can recall, there is a bit about tampons that has the same gross-out quality to it. But, balanced with the countless moments that are just genuinely funny, the really out-there moments aren’t overwhelming. I credit this to, not only a great script, but the talents of all the actors that take part.

Schumer is a natural in the lead role of Amy, but she isn’t the only one bringing her comedic A-Game to the table. Bill Hader, who I recognize from the three SNL episodes I’ve seen this past decade, is super charming and surprisingly low-key in his role as unconventional leading man, Aaron Conners. He’s a sports doctor to major athletes like LeBron James, who plays himself (quite hysterically) in the film. In addition to James, WWE Superstar John Cena makes his comedy debut as one of Amy’s love interests, and the two of them pair up for one of the most awkward (but hilarious, of course) sex scenes I’ve ever seen.

Going into the movie, I didn’t realize that Tilda Swinton was playing Dianna, Amy’s horrid boss, and I spent the majority of the film wondering where I knew the actress from. She is far different in this role than others I’ve seen her in, but she’s fabulous as the cold-hearted editor that can only be fake nice for a few moments at a time before her total lack of compassion shines through.

Colin Quinn plays Amy’s father, convincing us that someone can simultaneously be a total jerk and one of your favorite people. Brie Larson and Mike Birbiglia round out Amy’s family as her younger sister and brother-in-law respectively. Both give strong performances, as does young Even Brinkman, who plays their sweet but unusual son, Allister. The way that Amy ruthlessly teases her sister about the domesticated life she has, demonstrates just how strongly she opposes a life like that for herself. She would much rather be a so-called train wreck than a wife and a mother.

Which brings me back to my original assumptions of what the plot would entail; unsurprisingly, it’s almost exactly what I thought it would be.

Amy Townsend is, according to the trailer, “a modern chick who does what she wants,” and for the first part of the movie, she wants to party, drink to excess, get high, and have sex with multiple partners. There’s no question in anyone’s mind where Amy’s attitude towards intimacy comes from – the opening scene in the film shows her father explaining why monogamy isn’t realistic – and therefore, when she forbids us to judge her in a sarcastic voiceover, we as the audience, do our best not to.

In fact, my first impression from the teaser trailer was inaccurate in that regard, as there is very little slut-shaming in the movie. Those around Amy don’t always approve of her lifestyle, but they still love and accept her for who she is, and when they do make suggestions about how she could change, it seems to be out of love and concern more than judgment.

Another aspect I got wrong in my prediction was the role that her main love interest, Aaron Conners, plays in her character’s turning point. I assumed that it would be one of those, ‘if I keep this up, I’m going to lose him, and I can’t live without him, so I’m going to change for him’ situations, and it actually isn’t like that at all.

The relationship that he and Amy have demonstrates two sides of the modern dating world: those who appreciate intimacy with a single person and want to build meaningful relationships with someone they care about; and those who, for whatever reason, have no desire to settle down with one person, and prefer the freedom of casual sex allowed by our hook-up culture. This dynamic isn’t exactly new, but the idea that it’s the female in the relationship that is scared of commitment, kind of is, and it’s interesting to see that play out on the big screen in a way that isn’t condescending or judgmental to either side.

(At this point, you may want to stop reading, because I’m about to get spoilery.)

Out of all the characters, Aaron is perhaps the most understanding of Amy’s antics, and the one time he calls her out on them, he’s justified. This leads to their very first fight, which Amy assumes is a break-up, and when he tries to show her how couples deal with fights and talk through them, it doesn’t go well. It’s Amy that gives up first, not understanding why this sweet, smart, life-saving doctor would want to be with someone like her, and breaks it off.

That’s just one example of how, throughout the film, we see how Amy’s self-destructive behavior affects her life, her relationships, her job, and her self-esteem. But it’s not until Amy herself wants things to change, that she makes an effort to do so. Once she makes that decision, she moves forward full force, clearing her place of all the liquor bottles and bongs, making things right with her family, fearlessly seizing a new career opportunity, and, of course, getting the love of her life back.

Ta-da! Cue the mostly happy ending that you’ll be expecting throughout the entire film. To be fair, there really is no other way this could go without being disappointing, and for a movie that tickles your funny bone and touches your heart as much as this one does, disappointment isn’t really an option.

While Amy’s revelation that monogamy might be realistic after all comes too quickly and feels a bit forced, the important thing to remember about the otherwise typical rom-com ending is this: Amy doesn’t make these changes so that she can keep a man in her life, or because her family members guilted her into it, or because society has shamed her into wanting to be something that she’s not. Her transformation is truly her own, one that she makes by choice, based on the discovery of what she wants in life, not what others want for her.

And that’s what ultimately makes her the modern chick that she claims to be.