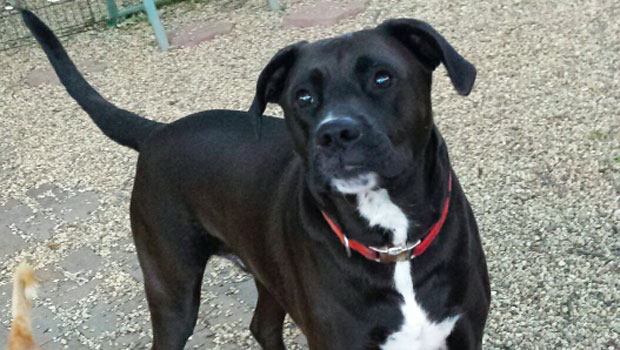 Affectionately called Double Stuff, he’s a big boy and has lost a few pounds playing with all the other dogs in his foster home! When this happy 4 year old, 85 pound Lab-Boxer mix wags his tail, (which is often) his whole rump wags with it!! What a great way to be greeted when you get home after a long day’s work! This affectionate boy loves everybody and everything; adults, kids, dogs and even cats!

Even though playing with the other dogs is his favorite pastime, he is a pretty laid back dude. Obedient, polite and quiet, he is trustworthy in the house since he is potty trained and doesn’t chew things. He crates well but you will quickly realize he doesn’t need one.

Is there anything wrong with this guy? Yes, he is homeless. If you are looking to share your home with a great companion, then you should meet Oreo!

You can fill out an application, go to noahshopeanimalrescue.com.