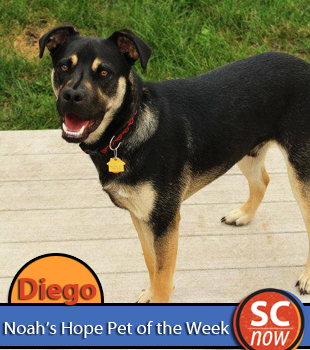 Pet of the Week – Diego 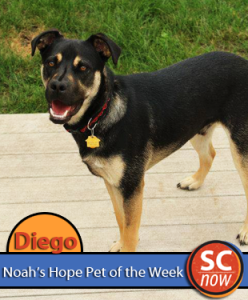 Why has nobody adopted Diego? He was featured on Sioux City Now several months ago, and yet he is still looking for his forever home. This beautiful German Shepherd mix is just over a year old. He’s kennel trained and house trained. He sleeps on the bedroom floor at night and goes outside in the morning.

He knows all of his basic commands: sit, lay down, shake, fetch, hang ten, and can even jump through a hoopla hoop! He is a very quick learner.

Diego is good with cats. Most dogs, too, but he has to be introduced slowly to other dogs. He can be protective when people come to the door, but once they are inside he loves all the attention anyone gives him.

At times he can show some food and toy aggression so he would probably do better in a home with no other dogs. We also recommend a home without small children because he does play a little rough.

Diego’s chewing has been minimal, which is great for a young dog. He can easily jump a 4-foot fence and he can climb a 6-foot fence. He will need a secured area for his bathroom breaks.

Diego is neutered and has all of his shots. If this beautiful boy belongs in your home, please call Deanna at 712-253-8394. Or visit our Facebook page or website for more information: