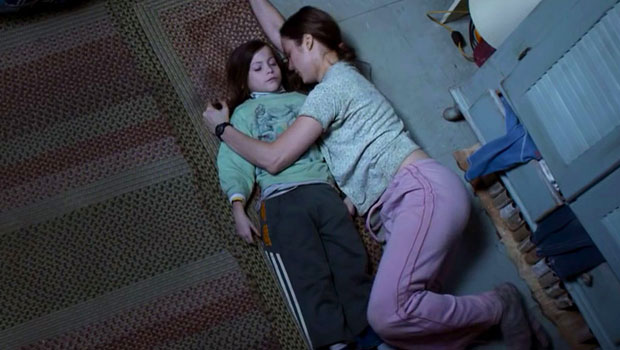 “When I was small, I only knew small things. But now I’m five, I know everything!”

We’ve all heard the horror stories – a girl or young woman is held hostage for months, like Elizabeth Smart, or years, like the three women who recently escaped their captor in Ohio, and they somehow, defying all odds, escape their captors and struggle to resume a full life. Room, a wonderful film adapted by Emma Donoghue from her novel by the same name, creates just a story.

Brie Larson, in her first major role (although she has done other very good work in mostly unnoticed films), gives an award-winning performance as a woman kidnapped at 17 years old and held for seven years in a one-room prison. Two years into her captivity, she is impregnated by her captor and gives birth to Jack, and the present action of the film begins with Jack’s fifth birthday.

Faced with the almost impossible task of giving Jack a normal life, Larson’s character, simply called Ma, does everything she can to retain some sense of that normalcy. She insists on regular exercise with Jack, reads the same books over and over to him, allows only limited time on a fuzzy-screened ancient television, and teaches him everything she can. Larson portrays Ma’s struggles with just the right amounts of anxiety and composure. This tightrope is heartbreaking, but only the audience sees that – Jack is, for all intents and purposes, a well-adjusted boy.

Jacob Tremblay, as 5-year-old Jack, also turns in a convincing performance. The young actor plays Jack as both well-behaved and rebellious, as any five-year-old is bound to be. His emotive range is impressive for a young actor, and we agonize with him and his mother as they survive their unimaginable situation.

Although there are important supporting characters in the film, most notably Sean Bridgers as Old Nick, Ma’s abductor, and Joan Allen as her mother, the film and the story is carried by the mother and son as they navigate and explore the bonds and boundaries of intimacy and freedom.

Little-known director Lenny Abrahamson manages the emotional state of the audience masterfully, balancing the horror of the situation with the love between the characters without drifting into sentimentality or melodrama. His understated style and careful pacing keeps audience members leaning just a little forward in their seats without the urgency of a thriller but with all the intensity of a suspenseful, emotional drama.

As the story unfolds under his careful direction, we are drawn inescapably into the dilemma of his characters. The screenplay, having the advantage of being written by the novelist, allows the characters to develop fully, and the story itself is compelling and well-told. Its only flaw is an escape attempt scene that is a bit implausible, but by that time we are swept up in Ma and Jack’s story so completely that we don’t hesitate to suspend our disbelief.

What elevates Room from being just another suspense thriller is the tenderness and beauty of the relationship between mother and son, and a glimpse into the struggles they face in a world of unnatural forced intimacy followed by the struggles they face in a bigger world in which they must revise that intimacy. We see the larger world for both the joy and the complications it brings – it is not portrayed as some utopia that they’ve finally reached, but rather as another set of trials to face and surmount. This complexity turns what could have been a one-dimensional film to a multi-layered and moving story, making it one of the best films of the year.