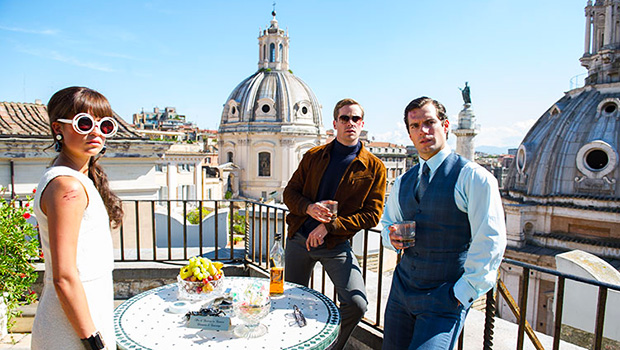 Resurrecting a television series from the past into a feature film is nothing new to the big screen, and The Man from U.N.C.L.E. is the latest attempt to do so. Much of its audience, however, won’t remember the series as it originally aired from 1964 through 1968. This is probably a good thing as the retro feel is fleeting and light in the current production. But the film is strong enough to exist as it stands, even without prior knowledge of the television series.

The concept of the film does require, however, at least a basic understanding of the cold war of the sixties when the U.S. and the Soviet Union battled over world domination: two spies – one from the U.S. and one from USSR – are required to team up to stop a third party from developing and selling a nuclear bomb. The two spies, played by Henry Cavill and Armie Hammer, develop a love-hate relationship during the film, and they are aided by a “chop-shop girl,” played by Alicia Vikander, who represents Great Britain in the multi-national mix.

The three’s adventures make up the action of the film, and the relationships make up the heart of it. The acting is not great – there will be no nominations for any awards – but the film survives anyway.

Cavill, in an attempt to convey the suave, sixties playboy with a good heart, is a bit wooden and seems to model his character after Don Draper in Mad Men. His character never feels authentic, but he is, surprisingly, likeable anyway. Hammer provides the strongest performance; he’s fun to watch and easy to look at, and he carries his lines a little more realistically. Vikander is weak in this role –  she never seems to get the accent right and never really develops the chemistry with her costars that she should. The chemistry between the two spies is believable though, and that saves the film.

The supporting cast members – Debicki as the criminal mastermind and Grant as the British chief of the multi-national organization U.N.C.L.E – carry their roles effectively, especially Grant who is charismatic and convincing as usual. His role could be expanded and hopefully will be in any future installments of the story.

Director Guy Ritchie, who brought us the Robert Downey, Jr. versions of the Sherlock Holmes films, dresses the film up pleasantly and never lets it take itself too seriously, just as he didn’t with those films. We’re never asked to think about anything too much, and no big themes are explored. It is refreshing to enjoy a film simply for its story rather than having heavy themes thrust upon it when it is clearly not able to carry them.

The plot is clear if somewhat simple and predictable, as is the writing. The story ends with a clear segue into a sequel, so it appears these characters will have the opportunity to develop further in later installments.

The idea of a sequel is not a bad thing – the film overall was enjoyable and fun to watch. Just don’t go expecting to be swept away by it. Like the cold war itself, much of the film is hype and window-dressing with little substance, and little will come of it. But if you want a light fare and an enjoyable evening, you can’t go wrong here.

The Man from U.N.C.L.E. is now playing at the Sioux City Promenade Theatre. Click here for showtimes.