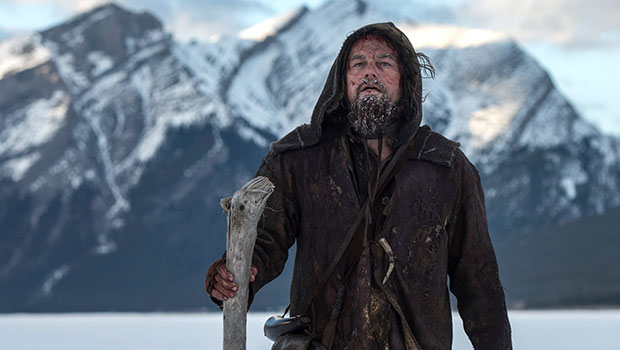 “As long as you can still grab a breath, you fight. You breathe . . . keep breathing.”
– Hugh Glass

You can now listen to this review on KWIT, or keep scrolling to continue reading.

When I watched The Revenant for the first time, I anticipated a strong and moving film. I was not disappointed with the quality of the film – it is undeniably well-crafted, well-acted, and most certainly memorable. These strengths make it the biggest favorite for this year’s Academy Awards with 12 nominations, and led to its winning the Golden Globe for Best Picture, Best Director and Best Actor. However, as strong as the film is – it certainly filled my senses with a mix of beauty and horror and tested my ability to witness violence, pain, and suffering – I found myself leaving the picture feeling like something was missing.

After some thought and seeing the film again, I realized the lack I felt was heart. Not, of course, the kind of tenacious heart that drives and sustains Hugh Glass, the long-suffering protagonist of the film who, against all odds, survives the worst possible scenarios, but the kind of heart that reflects the connection and strength shared among human beings. And although a best picture can most certainly lack warm and fuzzy feelings or a theme that speaks to the connectedness of all beings, it shouldn’t leave its audience unfulfilled and emptier than it was when it came.

The story is partly based on the true story of Glass, a fur trapper in South Dakota in the early 1800s. Glass, while serving as a guide for his troop, is mauled by a bear and eventually abandoned and left to die. The film takes liberties from the original story, giving Glass a murdered son and a yearning for revenge, which is his driving force to survive. This is not the only deviation the film makes from the true story, and to avoid spoilers, I won’t list them all here. But a major deviation which I found quite distracting is that of setting. Glass’s adventures happened on the plains of South Dakota, not in the frigid mountainous regions of the film. Clearly more photogenic and more hazardous, director Alejandro G. Iñárritu opted for the more punishing environment of high mountains in which to set his film.

And the landscape is front and center in the film as Glass navigates its punishing indifference. The cinematography is breathtaking in places, partly an effect created by Iñárritu’s insistence that the film be shot in natural light. That insistence also leads to a dark, gray hue over the entire production, adding to the despair the character feels and battles.

Leonardo DiCaprio, in what is being touted as one of the best performances of his career, plays the unfortunate Glass with fervor and commitment. He pushes himself as an actor, saying it’s the hardest role he’s every tackled as he exposes himself to the elements, allows himself to be thrown around as a victim of bear attack, and even eats a raw buffalo liver. The critics and his fellow actors are impressed with his level of dedication, as am I, but his ability to convey any emotions besides pain and suffering is lacking. The ability to show the love he feels for his son and his wife, and even his anger at the man he’s avenging, is negligible. He speaks few words, and I found their whispered delivery a bit contrived and obvious.

Tom Hardy, playing the film’s antagonist, John Fitzgerald, has more lines than anyone else in the film, and many of those are delivered as if he has a mouth full of marbles. Even so, Hardy, a wonderful actor, turns in an overall good performance. His character is easy to dislike, but, as with the Glass character, is somewhat one-dimensional. The character that seems the most complex is that of Bridger, played by the young Will Poulter. Other supporting trapper characters, including the group’s commanding officer, Captain Andrew Henry, are forgettable.

One strong aspect of the film and its casting is that of the Native Americans. Unlike many past productions, those characters are actually played by Native Americans. These performances are good, especially Forrest Goodluck’s as Glass’s son, but they are all peripheral to the primary action of the film. This is unfortunate, for the strongest scene in the film, the one that carries the most heart and emotion, is one of an intimate interaction between Glass and a lone Native man who saves his life. Too quickly ended, the film returns to its prevalent themes of violence and suffering.

Those elements, violence and suffering, are the overriding effects of the film. From the opening few minutes in which we witness the graphic violence of an Indian attack on the trappers to a graphic closing scene, the film focuses our gaze on the horror of Glass’s situation and the world in which he lives. Although the artistry of the filmmakers is indisputable and it’s the biggest production of the year, it’s not the best. The film, described by one critic as “pain porn,” is devoid of any real depth. It is simply a gut-wrenching story played out in well-acted, one-dimensional characters on a breathtaking stage. And because of its spectacle, it has, and most likely will, beat out better films this awards season.

The Revenant is now playing at the Promenade. Click here for Showtimes.

Hear Leslie read her reviews on Movies With Leslie on KWIT!