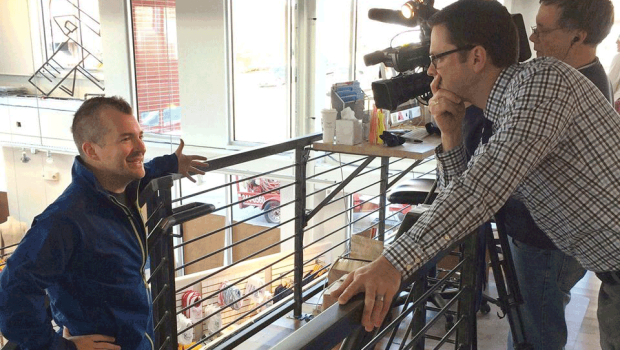 Mike Draper is the undisputed T-shirt king of the Midwest. His shirts are honest, hilarious and snarky, and they poke fun at our humanity, our geography and the world around us.

The shirts are simply designed with large blocky text, often with quirky designs, maps and otherwise. One shows Abe Lincoln riding a T-rex with bat wings holding the constitution with a single word below it: Freedom.

Here’s a sampling of some shirts he’s created in the past decade.

“Iowa – Wave the Next Time You Fly Over”

“This is my tailgating shirt” 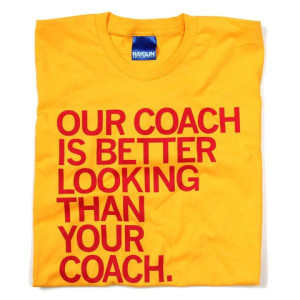 While it started with Iowa shirts, Draper has made the greater Midwest his target for fun and tomfoolery. Kansas City, Sioux Falls, Fargo and Chicago all have a place in Raygun shirt history now. As do Iowa towns Decorah, Carroll and Norwalk. Sports, politics and pop culture are other popular topics. A recent shirt declared: “26 June 2015: America is Now Finally as Gay as Iowa!”

Draper opened his first store in Des Moines in 2005, and has since opened a much larger store in the capital city. He’s also expanded his product line beyond Tees to include other clothing, notebooks, stickers, and much more.

Here’s our Q&A with Draper., who is the keynote speaker at Base 3, an entrepreneurial event set for Thursday at ISA Design West. Find information on the event here.

Question: How did you get started in the T-shirt business and how did you discover your niche?

Answer: I’m from Iowa, but I started selling t-shirts while a student at the University of Pennsylvania in Philadelphia. After graduation, I traveled around out East, selling t-shirts on the street (New York, Boston, etc). Along the way, I decided it would be a good idea to move back to Iowa and open my own store and screen printing shop that would specialize in pro-Des Moines shirts and Iowa inside jokes. I had never worked as a designer, never screen printed myself, never worked in a clothing store, taken a design class, used a cash register, or really had a real job. So it seemed like a can’t miss business plan!

Q: Who/what motivates you to keep doing what you do?

A: I’ve got bills to pay and debt to service! Just kidding. But only kind of.

I still really like this job. I have loved creative stuff all my life, and more than that, I loved creative projects. So when I started playing the guitar, I took that up to wanted to record albums, to putting on live shows, to more complex live shows.

RAYGUN is really just the creative project I have taken the furthest. It’s nice to jump for the next rung and see where we can take this mother.

Q: Poking fun at your hometown, state and rivals is a lot of fun. What do you love most about what you do?

A: I just really like to work someplace where I can laugh a lot, joke around, but where any idea has the potential to come to life. I own 100% of the company, so there is no board, no investors, etc to run ideas by. What we sketch up, I can say yes to and we can do. It’s a cool job.

Q: What does your company look like in 5 years?

A: Hopefully functional. Just kidding. But only kind of.

There’s no guarantees, though things have gone our way over the last few years. We’ve built a good foundation in Des Moines, and recently opened a much larger headquarters that can accommodate growth and expansion. In 5 years we’ll probably have 6 stores and will be mapping out a plan for an even larger store in Des Moines.

Q: What’s the best part about entrepreneurship? What’s the worst part of it?

We’ve run out of money a few times (if you’re growing and leveraging to grow, it’s hard not to), and running out of money sucks. Money’s not everything all the time, but if you don’t have money, money is everything.

Still, this job is kind of what I’m built for. I like the day to day, I like driving it. So you take the good stuff with the bad stuff.

Q: Where do you come up with your ideas for shirts?

A: It’s a group effort. There’s me and 2 full time designers, but any of the people here can offer ideas.

Q: What is your favorite Raygun Shirt? Why?

A: Des Moines: Hell Yes. I love it because when I made it in 2006, it was clear that people here really got the joke, and though it was a one-man show back then, I had a feeling like the company may go somewhere. And we sell a lot of it, which I like ‘cause you can’t pay rent with sunshine.

Five reasons to rent a cabin in the off-season → 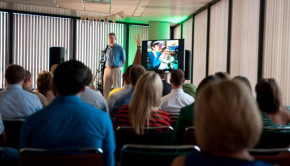