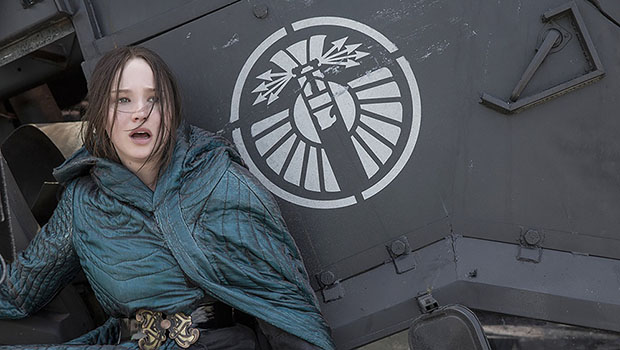 For whatever reason, dystopian novels – and films inspired by them – are really in right now. You’d think that, with all the depressing stuff happening in the world today, the last thing anyone would want to do is read about government corruption, societal oppression, and war, terrible war, just for funsies.

But, a lot of people are clearly into it. And I’m one of them.

The Hunger Games wasn’t my first dystopian rodeo. A friend of mine recommended it to me after I told her how much I loved a different young adult series with a similar theme by Scott Westerfeld called Uglies. (That recommendation goes both ways, bee-tee-dubs.)

I was skeptic at first, but I trusted her, and gave the first book a shot. Needless to say, I fell in love with the series, and was ecstatic to hear that it was being made into movies.

Now, I’m not the type of person that re-reads her favorite books over and over again. I’ve read The Hunger Games trilogy exactly once, and it was before the movies came out, so it’s been awhile and my memory isn’t what it used to be. Going into The Mockingjay – Part 2, I had a vague sense of what was going to happen, but the details were fuzzy.

In fact, the details were so fuzzy that I spent the entire film waiting for a major character death that never actually happened. I was pleasantly surprised…and super confused!

Just as with any book-to-movie franchise, you don’t have to read the former to enjoy the latter. But, seeing as how this is the fourth and final film of the series (and a two-parter in itself), you should probably see the rest of them before watching this powerful conclusion. So, for this review, I’m going to assume that you have seen everything up to this point. In other words, there be spoilers here.

When we last saw Katniss Everdeen, she was recovering from an unexpected attack from Peeta Mellark, who was just rescued from the Capitol and brought to the underground bunker of District 13. We found out at the end of Mockingjay – Part 1 that Peeta was brain-washed to hate Katniss during his imprisonment, and was essentially programmed to kill her on sight. Hence why it was so easy to rescue the captured victors – President Snow wanted Katniss to die at hands of the person she (maybe?) loved most.

Part 2 picks up shortly after the Peeta-bomb dropped. No intro music to get you in the mood, no wide angle shots to set the scene. Just – BOOM – a seamless transition from one film to the next.

Even with the quick start and steady pace, and despite the fact that this is the climax of the entire series, the film doesn’t rush right into action. Before the battles truly begin, we first catch glimpses of the various agendas that are in place.

The agenda that we see play out the most of is the one that belongs to Katniss, who makes it her mission to kill President Snow personally, for everything he’s done, including destroying her entire district, and turning the man she (maybe?) loves against her. 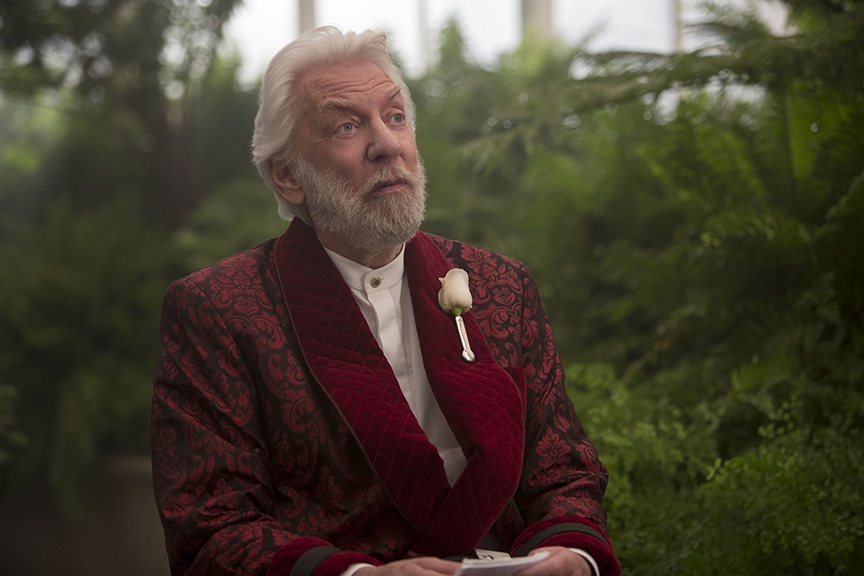 It’s not Katniss’s plan to kill Snow that finally validated her as a heroine in my eyes after years of watching her be touted as one. It’s the fact that, after seeing her be manipulated by outside forces from the very beginning of the story, we finally get to see her take an active role on her own terms. 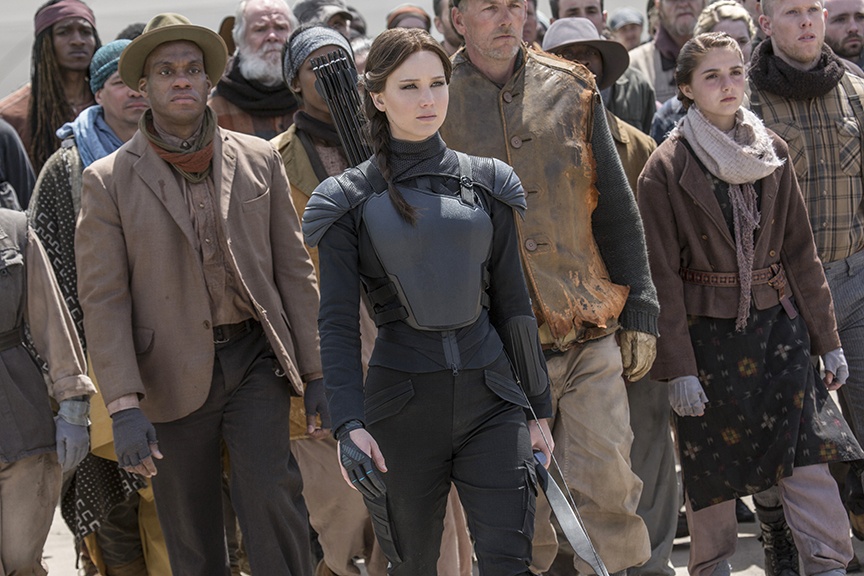 Even without the loss of a character I was expecting to mourn, plenty of others meet their end, and while there isn’t much time for our heroes to grieve on the battlefield, there is one particular moment where Katniss remorsefully declares, “I never meant for any of this to happen.” It’s not the first time she’s made such a declaration, but it feels significant, because she is accepting that her actions don’t just affect her, but everyone around her, whether she wants them to or not. 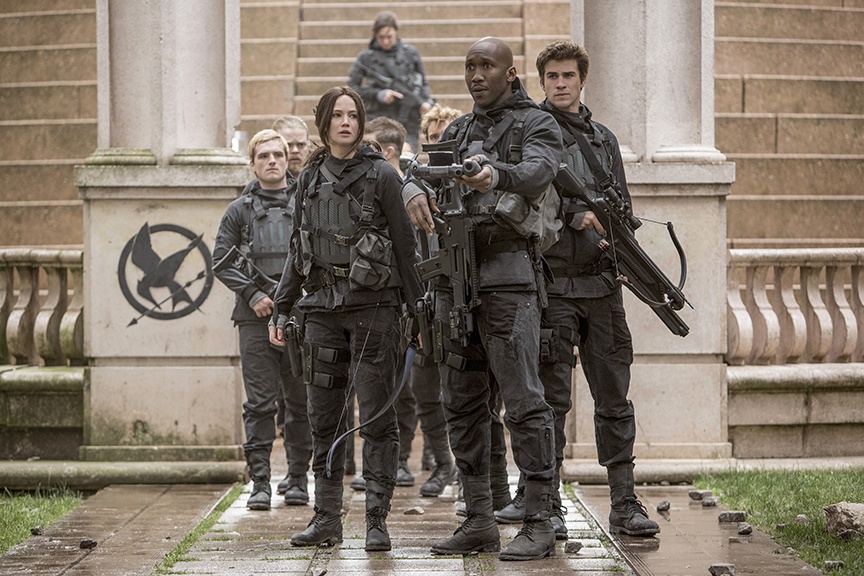 One of the things that makes Katniss Everdeen such a unconventional hero is that she’s always been at best a reluctant one, and at worst a completely unwilling one. From the moment in the first film when she volunteers to take her sister’s place at the Reaping, she is placed into situations where her actions are perceived as heroic, when in fact, Katniss isn’t really thinking about being a hero at all. 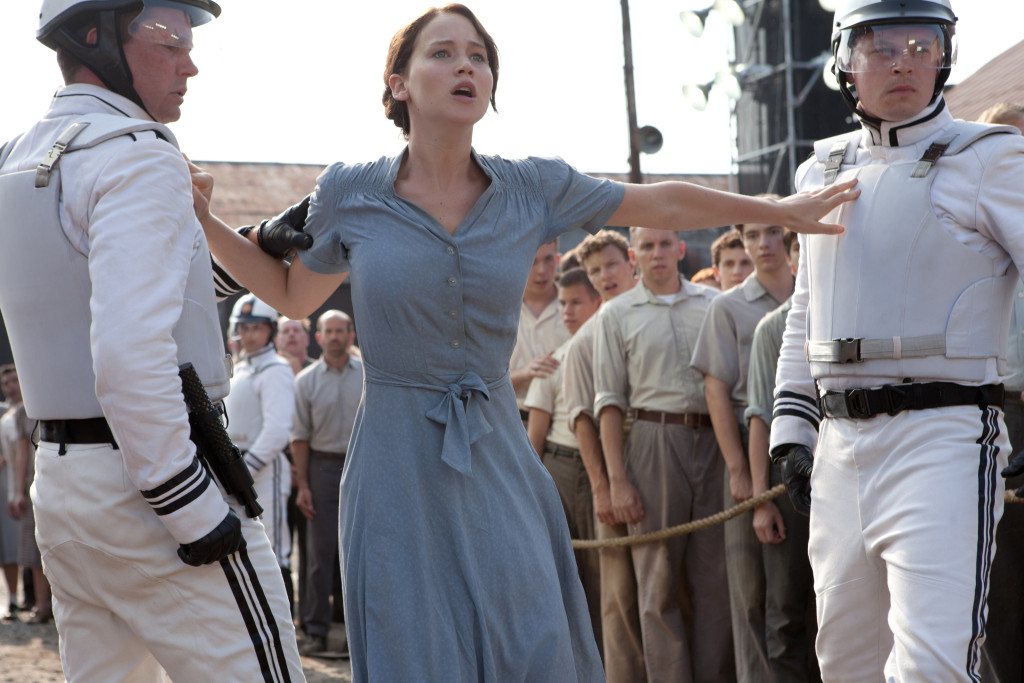 She’s just a teenage girl trying to save her family, her friends, and — if she can manage it — herself from death, whether it be from threat of starvation, the abominable Hunger Games, or the senseless violence of war.

Katniss doesn’t set out to spark an uprising, or fuel a revolution, or to be the face of a district-wide rebellion against the Capitol. So, when her actions do inspire all of those things, it’s understandable that she doesn’t want to take responsibility for them. As awesome as she is, it can be difficult to view her as a hero when she doesn’t want to be one, which is the issue I’ve had with her from the beginning. 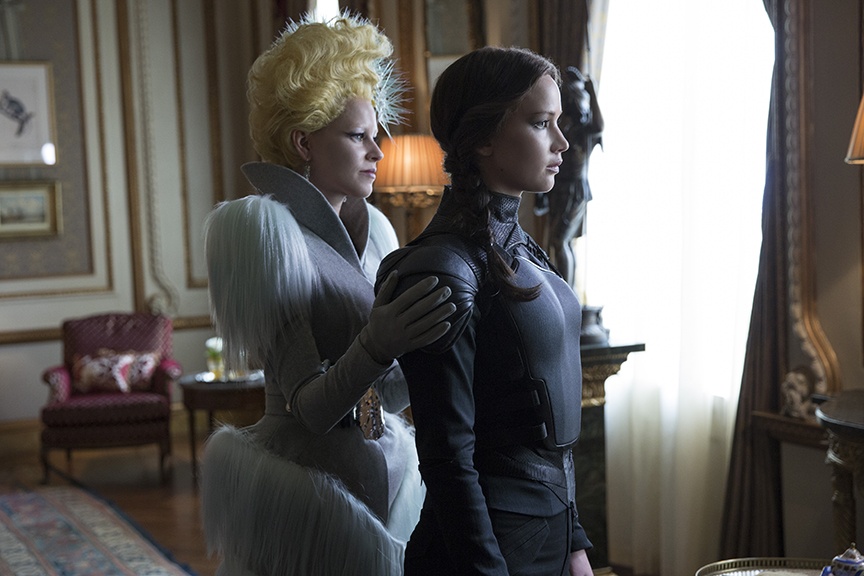 I, like the citizens of the rebelling Districts of Panem, want to believe that she’s the hero I think she is, but at the same time, part of me just wants everyone to leave her alone, because she’s right: she never asked for any of this. 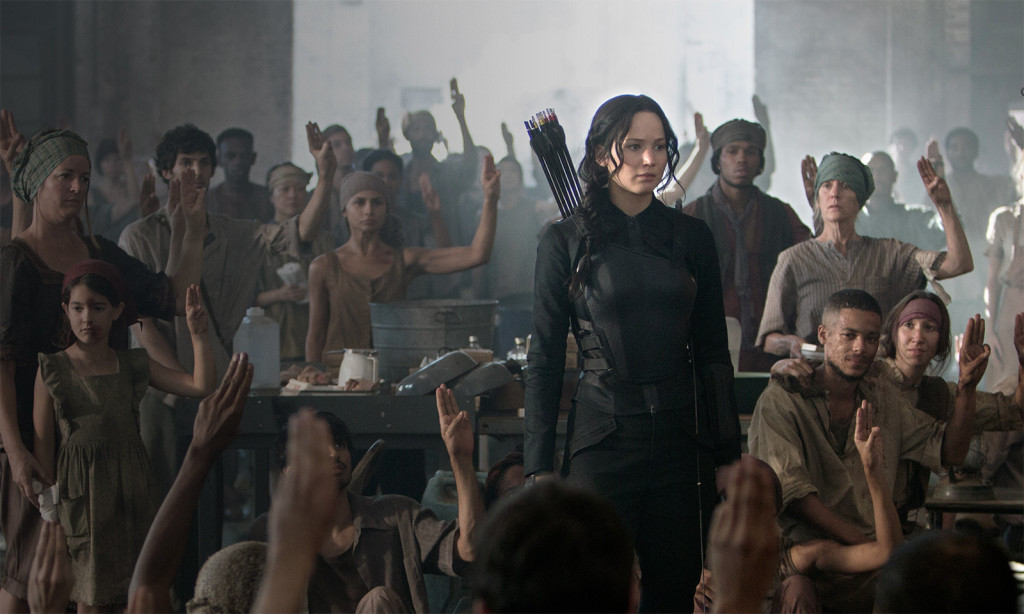 That’s one of the beautiful things captured in this film. We see Katniss transform into a hero of her own making, not one that’s tricked, manipulated, or forced into it.

Since donning the mockingjay pin in the first installment, Jennifer Lawrence has given a pretty stellar performance as Katniss Everdeen, but I think this one was her best. Her emotional moments — which have been a bit over the top at times — were more believable this time around. 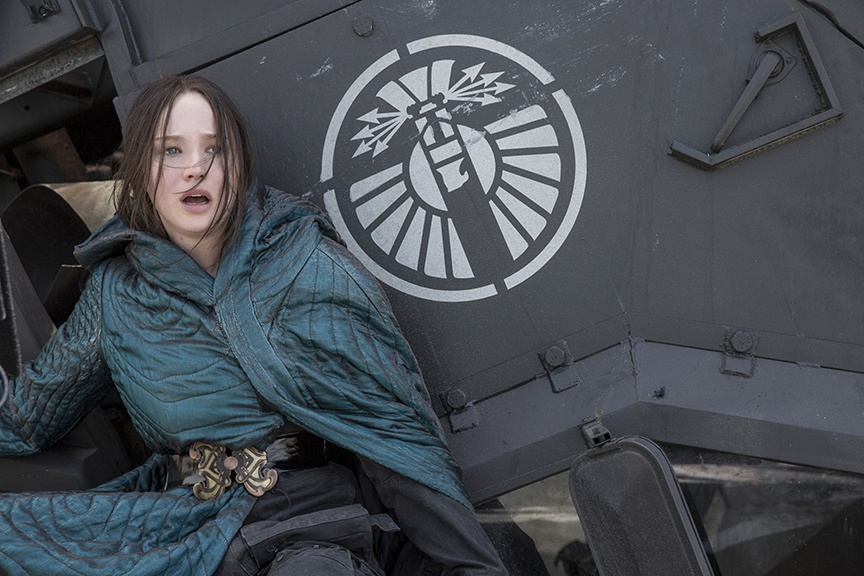 Of the two love interests, Psycho Peeta was the tougher part to play, and Josh Hutcherson did a great job portraying him with just the right amount of crazy to make us uneasy, but not enough for us to give up hope that he can come back from his condition. 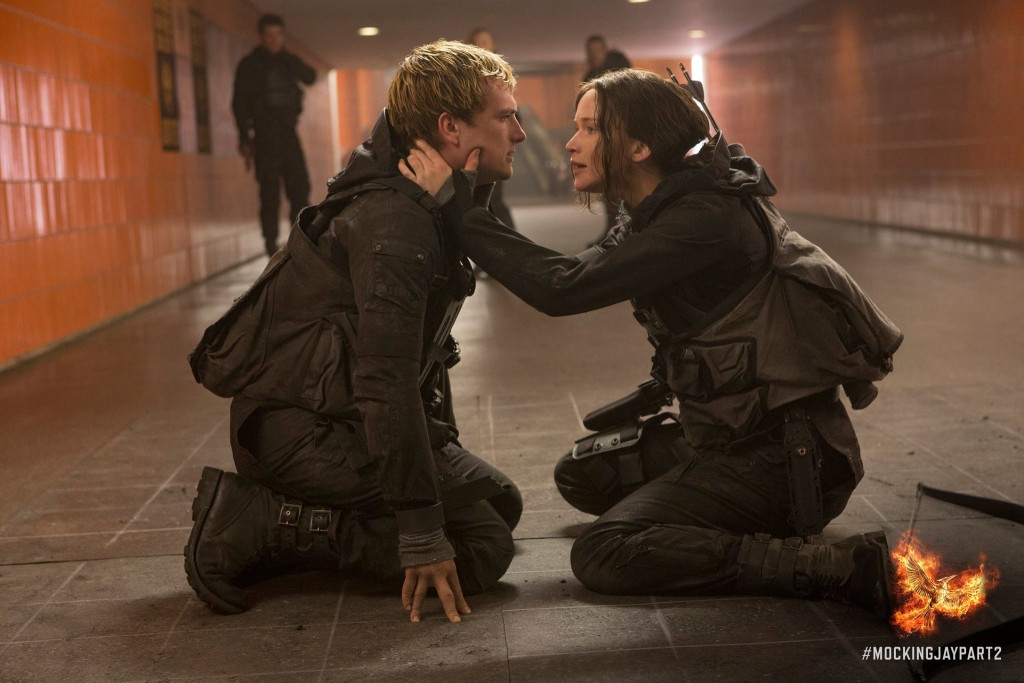 Gale Hawthorne oscillates between love-sick and war-hungry so much that it’s dizzying — one minute giving Katniss a hard time about her not-as-requited feelings for him as though they don’t have bigger things to worry about, the next man-splaining to her about the costs of war and the sacrifices that must be made — but with the face and talents of Liam Hemsworth, he can almost pull it off. Almost. 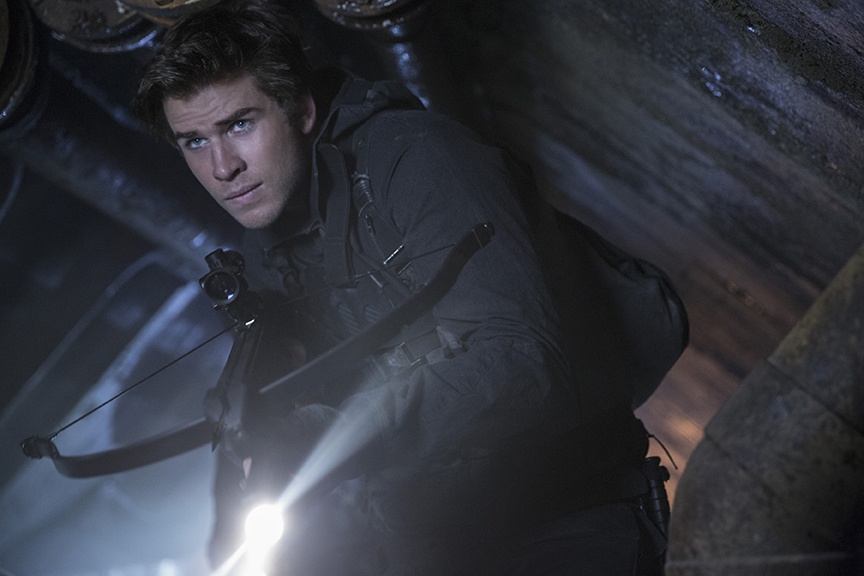 Front and center in this second part of Mockingjay is Alma Coin. Julianne Moore plays the cunning, smooth talking President of District 13 well, making her growing confidence in their ability to take down the Capitol a smooth transition from her perceived meekness in Part 1. 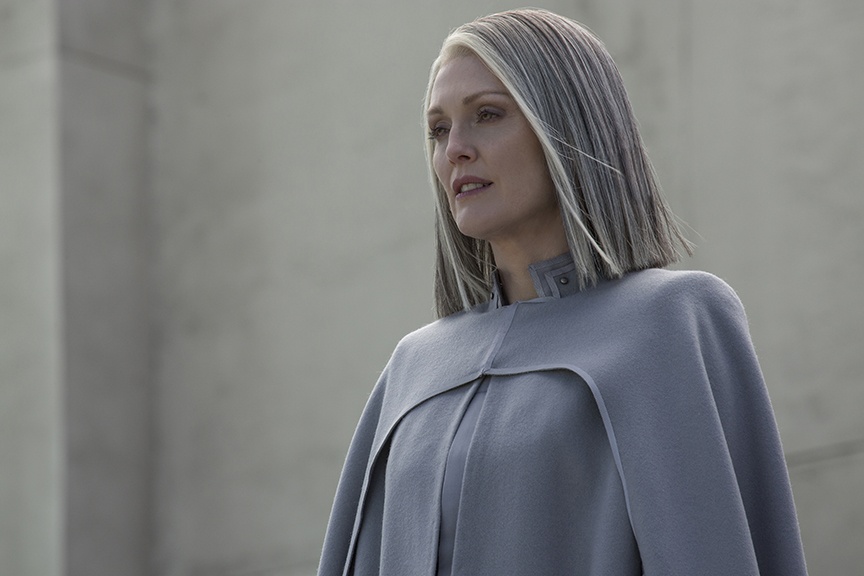 With the film so focused on Katniss’s plan to kill President Snow (Donald Sutherland does another superb job as the despicable leader of the Capitol), there is regrettably not enough of the supporting characters that we’ve grown to love so much. Haymitch Abernathy (Woody Harrelson) and Effie Trinket (Elizabeth Banks) practically fade into the background, which is understandable, but unfortunate. Fellow victors Johanna Mason (Jena Malone) and Finnick Odair (Sam Claflin) only have a few small scenes, but they’re memorable. 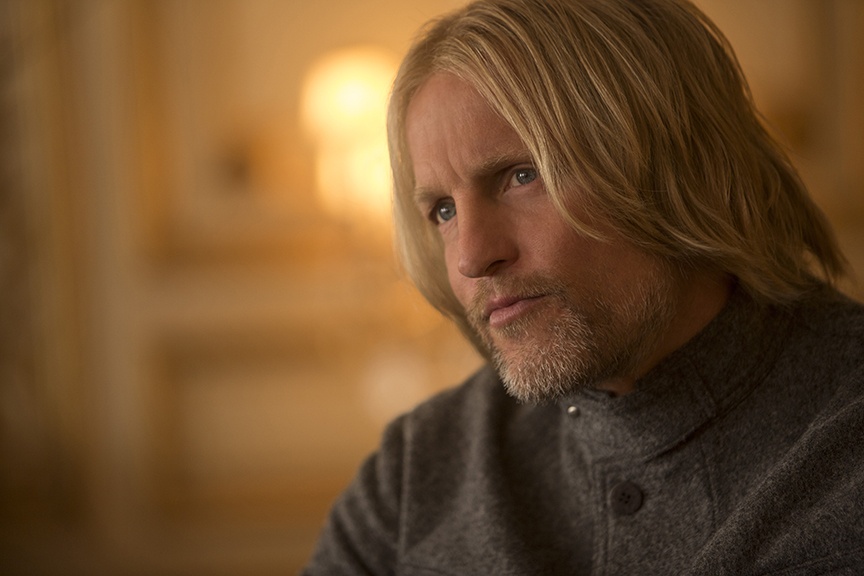 And, understandably, we don’t see much of Plutarch Heavensbee, played by the late Philip Seymour Hoffman, as he died shortly before filming was complete. But what we do see of him is a treat, and I for one, am glad that director Francis Lawrence decided not to use CGI or other digital methods in an attempt to replicate is performance. 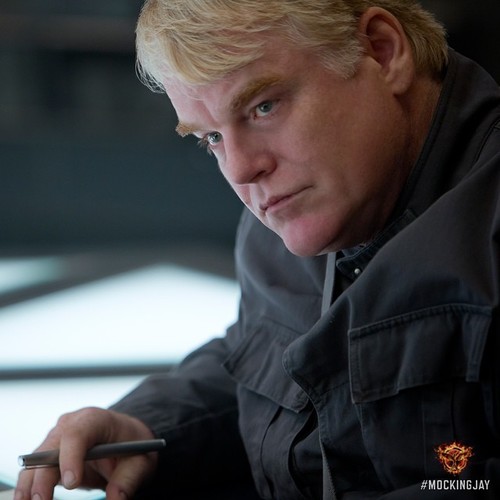 The special effects they do use in Mockingjay – Part 2 are stunning, and combined with the set designs and costumes, help us disappear into this war-torn, dystopian world created in the novels by Suzanne Collins.

I may not remember everything about the novels, since I read them so long ago, but I recall having mixed feelings about the epilogue when I read it. It felt awkward and out of place, and that feeling rang true in the film version as well, but it serves its purpose in wrapping up the story and giving us some much-needed closure.

The success of The Hunger Games series has inspired a new collection of dystopian novels and movies, and with those new stories comes a new type of hero, for which I am incredibly grateful. In addition to being entertaining, I think these types of stories and characters send a powerful message, especially to their young audiences, about how one person can make a difference when they stand up against oppression and injustice.

The Hunger Games: Mockingjay – Part 2 is now playing at the Promenade Cinema.  Click here for showtimes.