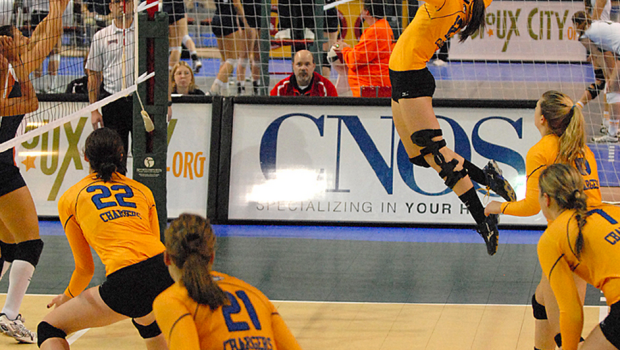 It’s a busy week in Sioux City for events – including volleyball, comedy and musical theatre.

NAIA Volleyball Championships
For the 8th year in a row, the NAIA (National Association of Intercollegiate Athletics) Volleyball Championships will return to the Tyson Events Center this week (Tuesday through Saturday). 24 teams from all over the United States will be heading to Sioux City in hopes of winning the National Title. Head down to cheer on your favorite teams!

Greg Warren
Greg Warren has been building a strong fan base around the country with his act inspired by stories from his Midwestern upbringing. Greg attracts a diverse audience spectrum, performing on networks such as BET (as a finalist on Coming to the Stage) and Country Music Television’s Comedy Stage. Greg is also a favorite on the nationally syndicated Bob and Tom radio show, which led him to tour theaters across the country with the Friend of Bob and Tom Comedy Tour. Don’t miss this chance to see Greg Warren in Sioux City at the Hard Rock on Wednesday night. Show starts at 8.

Comedy Open Mic Night
Thursday night, head down to the Chesterfield for comedy open mic night. Show off your skills or just enjoy a night of laughter with friends. Admission is free and things get kicked off at 8!

A Christmas Story, The Musical
A Christmas Story, The Musical is the hilarious account of Ralphie’s desperate quest to ensure that this most perfect of gifts ends up under his tree this Christmas. Opening this week at the Sioux City Community Theatre you won’t want to miss your chance to see this holiday classic so reserve your seats today. Shows this week are on Friday and Saturday, tickets are $15 for adults and kids 12 and under are $10.