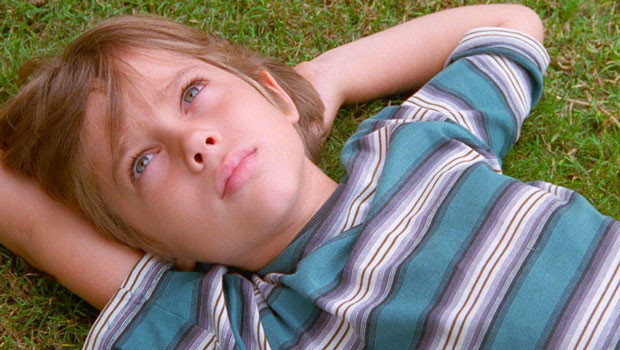 “What’s the point? I mean, I sure as shit don’t know. Neither does anybody else, okay? We’re all just winging it, you know? The good news is you’re feeling stuff. And you’ve got to hold on to that.”

Every once in a while, a filmmaker will try something new. Besides the technical innovations we’ve seen over the years, directors and filmmakers have also experimented with time manipulation, the blurring of story and storyteller, or the blending of media in their storytelling. Richard Linklater’s Boyhood makes such a creative leap, earning critical acclaim and Oscar buzz when it hit theaters this past summer, and keeping it a frontrunner for best picture and best director at this year’s Academy Awards.

Linklater decided to shoot the film over 12 consecutive years, beginning when its protagonist, Mason, played by the likable and convincing Ellar Coltrane, is six years old, and ending when he leaves for college. Each year the cast and Linklater reunited to shoot the next few scenes, and the audience is treated to the actual aging of its cast and the actual passage of time through our popular culture and history. This unique method of storytelling is compelling and fresh, even if the story is commonplace and uneventful.

The script, also written by Linklater, contains just enough conflict to keep its audience involved, but it portrays no larger-than life struggles of good vs. evil or right vs. wrong. Mason navigates his mother’s lousy marriages, sibling and step-sibling relationships, and the familiar teenage angst of love, work, and meaning through which all adolescents traverse. From beginning to end, Mason’s character is likable, as is the supporting cast – his mother played by Patricia Arquette and his lovable if sometimes-errant father played by Ethan Hawke. If any character is weak, both in the script and on the screen, it’s Mason’s sister Samantha, played unconvincingly by Linklater’s daughter Lorelei.

The film’s movement through the years and the development of the characters is surprisingly seamless for the length of the project. Coltrane, who was young enough to be a real unknown quantity, turns out to be charming, convincing, and a really good actor. Comfortable in front of the camera, we are lost in his story and his character.

Arquette, nominated for best supporting actress for her role, is a favorite for the Oscar. Her low-key performance is for the most part well acted, but when she cries on screen (twice in this film), it’s hard to believe her. Clearly this weakness is overlooked as she’s swept the other awards shows (winning the Golden Globe, SAG, and BAFTA).

Hawke is also nominated for best supporting actor, but up against the likes of J.K. Simmons in Whiplash, he’s not a favorite for the award. His performance, however, is the strongest other than Coltrane’s.

The film is also nominated for best directing, writing, and editing. Linklater definitely deserves the win in directing for his innovation and accomplishment, and the film’s editing is seamless and effective. While the script is good, there are others that are perhaps more deserving, as the film’s strength is not its story but its convincing conveyance of a typical boy’s growth from child to young adulthood.

This life portrayed carries no great epiphany or even a real coming-of-age plot line. However, as our gaze is primarily focused on the main story of Mason’s growth, we’re also treated to the effects time and a child’s growing to maturity has on his family. Arquette’s character, more than any other in the film besides Mason, changes and struggles with the passing years. Her journey from a young, struggling, abandoned mother to a college professor is the subplot to Mason’s development. For anyone who has weathered children growing up and leaving home, her character’s dilemma is familiar and authentic. Linklater’s script captures the paradoxical combination of freedom and loss all new empty-nesters experience.

Because of the characters’ range of experiences, most audiences will find something in Boyhood with which to identify. The experience of this film is similar to the wisdom Mason’s dad imparts upon the college-bound young man – so much of life is just winging it, and if we experience the ride of emotions that arise each passing moment, we’ve got something to hold on to.

Boyhood is available on DVD. You can view the official trailer below: