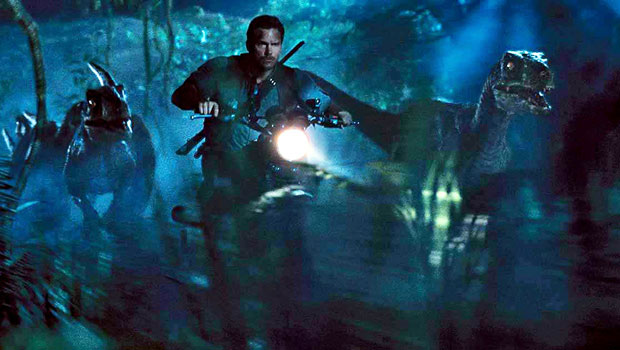 “You just went and made a new dinosaur? Probably not a good idea.”
– Owen Grady

Let me start by saying that I absolutely loved Jurassic Park.

I saw it in the theatre when I was about 10-years-old, and it remains one of my all-time favorite films to this day. I can’t claim to be a fan of the franchise as a whole — I only vaguely remember watching the second and third films on late night TBS or something — but when I saw the teaser trailer for Jurassic World, I knew this sequel would be different. And I was ridiculously, counting-down-the-days excited.

This past weekend, the wait was finally over, and I got to sink my teeth into a delicious bite of Nostalgiasaurus Rex.

By far my favorite part of this new Jurassic film are all of the throwback moments to the old one. Some are really obvious, but several are much more subtle. I don’t want to give them away, because it’s so much fun to spot them on your own, but if you’re a fan of the original film, keep your eyes peeled for these “easter eggs.”

One of the saddest things about the original film, for me, was the dream-crushing realization that Jurassic Park, as John Hammond imagined it, would never actually exist. It got too out of control. It was too dangerous. It just wasn’t meant to be. Dinosaurs were amazing and terrifying creatures that were never meant to mingle with humans. No way would anyone dare to try something like that again, right?

Surprise! They actually did it. Some how, some way, they were able reorganize, reassemble, and relaunch the park. Not only that, it has presumably been incident-free for quite some time, judging from the lackadaisical approach the staff takes regarding safety and security. But, most importantly, Jurassic World, the park, is, for lack of a much better word: AMAZING.

That is just one of the things that makes Jurassic World, the film, so awesome. It gives us a chance to see what a dinosaur theme park might actually look like in a world where it was scientifically possible to make it happen…even if we all know that it’s a really, really bad idea.

In some ways, it’s hard to fathom a society that’s so used to the idea of dinosaurs that they’re practically bored with them, but the film makes that believable, especially through the eyes of brooding teen Zach (Nick Robinson). Compared to his younger brother Gray (Ty Simpkins), who still has a child-like fascination for the creatures, Zach has dismissive, eye-rolling, attitude towards the Jurassic World experience, and that seems to be the consensus among the human world in the film.

Gentle Giants petting zoo, complete with baby Triceratops rides? Yawn. Riding alongside an Apatosaurus in a gyrosphere? Whatever. A T-Rex devouring a goat? Been there, done that. Mom, do we really have to go? I’d rather play video games.

Cue the latest upcoming attraction to Jurassic World: the Indominus Rex, a brand new kind of dinosaur baddie, genetically engineered to up the “Wow Factor” and scare the crap out of the kids (and maybe even the parents).

From there, the film follows a mostly predicable formula, cut from the same cloth as the original from 22 years ago.

Hero learns about awful plan, shares disapproval, provides logical argument against bad decision. Silly corporate people don’t see what the big deal is, laugh off warnings as nonsense, continue with said awful plan. Chaos ensues, as chaos does (thank you, Dr. Ian Malcom). Dinosaurs get loose. People get hurt. Some people die. All leading up to the ultimate dino v. dino battle for the King of Jurassic World title.

But here’s the thing: this formula works. That’s the reason the first movie was such a success. Throw in a few surprises, some new technology, shameless product placements, a little bit of family drama, and Chris Pratt hunting with Velociraptors on a motorcycle, and you’ve got yourself a summer blockbuster that fans both new and old can enjoy.

I could stop there and give this review five stars…but I should probably say something about the humans involved in the film. Even if they aren’t as impressive or memorable as their ultra-realistic CGI costars, without them, Jurassic World would be more like one of those fake documentaries on Animal Planet than a major motion picture.

Pratt was charming and likable as Jurassic World’s resident Raptor Wrangler and protagonist, Owen. It was preposterous to me, at first, the idea of somehow training or domesticating the fierce Velociraptor, and it took some skill on Pratt’s part to suspend my disbelief that what he was doing was even possible. By the end, his interactions with the raptors, especially the mischievous Blue, turned out to be some of my favorite moments.

I found Pratt’s performance to be more believable than Bryce Dallas Howard’s portrayal of Claire, the workaholic aunt of Zach and Gray, who happens to be the manager of Jurassic World. Perhaps it should be impressive that she managed to wear her high heels throughout the entire adventure without breaking her neck, but it just seemed stupid to me. There was a moment where she attempted to express concern about the safety of her nephews, and it that seemed so forced, I cringed a little. Whether this was Dallas Howard’s acting as Claire, or Claire’s acting like she cared that was flawed, I’m not sure.

The lack of a strong, likable female character is one major area where this film doesn’t measure up to its predecessor. Judy Greer spends most of her limited time on screen as Zach and Gray’s mother crying. Claire’s assistant, Zara (Katie McGrath), plays a minimal role, and fails at the one job she’s given to do.

Even Zach’s insufferable girlfriend manages to wear out her welcome in the 60 seconds she’s around. My favorite female character in the film was Jurassic World employee, Vivian, played by Lauren Lapkus, but mainly by default, not because she did anything memorable.

Jake Johnson was delightful as Vivian’s coworker Lowery, and did a great job representing the dinosaur fanboy in all of us. Vincent D’Onofrio, who’s almost always fun to watch, did what he could with the limited role of Hoskins, a secondary villain in the plot who wants to militarize raptors and train them for the battlefield.

Speaking of kinda-villains, BD Wong is the only (human) cast member from the original film to reprise his role, returning as Dr. Henry Wu. He’s more antagonistic this time around, his confidence most likely coming from decades of successfully engineering dinosaurs (and super dinosaurs) from DNA found in prehistoric ambered mosquitos.

So, the acting and writing weren’t flawless, but let’s be honest. Is that really why you’re going to see Jurassic World? No! You’re going because action! Because suspense! Because nostalgia! Because DINOSAURS!

And, in all of those areas, Jurassic World definitely delivers.

Disclaimer: Nakia isn’t a movie critic. She’s just filling in for Leslie, who’s enjoying her summer vacation out in the wilderness and off the grid. Happy trails, Leslie!